Living Long and Well: Age-Defying Habits and the Fountain of Youth by Melinda Hemmelgarn
At age 29, Betty Holston Smith, of Rockville, Maryland, weighed more than 200 pounds, smoked cigarettes and ate processed junk food. Now, almost 79 years young, she is a vegan ultra-marathon runner and an inspiration to anyone wanting to age well.
Smith’s story underscores the findings of researchers that have long pursued the keys to a long and healthy life. Some of these factors—heredity, for instance—are beyond our control. However, the most critical ingredient seems to be our daily habits.
Although we’ve all likely heard or read about someone that lived into their 90s, ate bacon, drank whiskey and smoked a pack a day, these individuals are outliers: In truth, longevity is determined by a combination of genes, environment, lifestyle choices and luck.
For example, some individuals may be born with genes that confer longevity, but be unlucky due to where they live. The National Center for Health Statistics reports that life expectancy varies by zip code. That’s because where we live influences how we live, predicting access to healthful food, clean air and water, safe neighborhoods and stress-relieving green spaces such as parks and gardens. Genes are important, but our social and physical environments play a greater role in predicting our “healthspan”—the essence of a long and healthy life.
According to researchers at the Columbia Center for Children’s Environmental Health, in New York City, even our first environment—the womb—can spawn diseases later in life if pregnant women are exposed to air pollutants, pesticides and the toxic stress of poverty.

Learning From the “Blue Zones”

In their search for secrets to longevity, investigators often look for lifestyle clues provided by long-lived populations. Those residing in what National Geographic Fellow and bestselling  author Dan Buettner calls “Blue Zones”, for example, are more likely to celebrate their 100th birthday and escape chronic maladies such as heart disease and cancer—the two biggest killers in the U.S.
Buettner has identified the “Power 9” lifestyle habits commonly practiced by centenarians living in the five designated Blue Zones—Sardinia, Italy; Okinawa, Japan; Ikaria, Greece; Nicoya Peninsula, Costa Rica; and the Seventh Day Adventist community in Loma Linda, California. Regardless of genetics, the following behaviors can help anyone slow the aging process and improve quality of life:

Survival of the Fittest

Tom LaFontaine, Ph.D., a clinical exercise physiologist based in Columbia, Missouri, says, “Mounting evidence shows that engaging in regular aerobic and strength exercise offers robust defenses against life-threatening diseases such as heart disease and several cancers.” One important marker of long-term health, particularly among women, notes LaFontaine, is bone mineral density (BMD). After menopause, BMD decreases in women and can lead to osteopenia—low BMD—and osteoporosis—pathological loss of BMD. “Women with osteoporosis are particularly at risk for fractures, especially of the hip, which can lead to a reduced lifespan.” 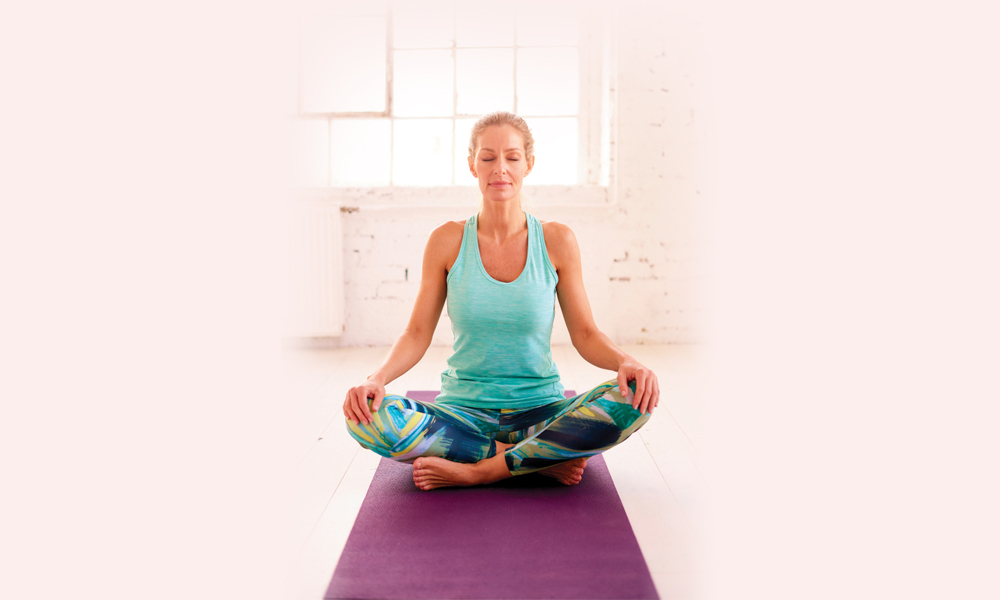 LaFontaine recommends weight-bearing exercises such as walking, jogging and high-intensity weight training to significantly improve BMD; and he’s proven that it works. “In 2012, we started a program called Older Women on Weights (OWOW), in which 40 post-menopausal women with an average age in the low 60s train with heavy weights. Some even participate in weightlifting competitions.”
“We have observed women in this group move from osteopenia to normal BMD and from osteoporosis to osteopenia based on pre- and post-bone density DXA scans,” he says. What’s more, the women in LaFontaine’s program have formed new friendships, benefitting from a strong network of social support.

Smith, the septuagenarian marathoner, was inspired to make a change nearly 50 years ago when her 3-year-old daughter teased, “You can’t catch me!” during an innocent game of tag. She knew she had to make a change.
She tried diet pills, fad diets and other quick fixes, but realized they were worthless. However, each evening Smith tuned in to Gabe Mirkin, a physician who hosted a national radio program about health and fitness.
Following his advice, Smith began eating a diet rich in organic fruits, vegetables, whole grains, beans, nuts and seeds, and says today she doesn’t want to put anything in her body that interferes with her lifestyle. She outlines the steps to her transformation in the book, Lifestyle by Nature: One Woman’s Break from the Unhealthy Herd to Roam Forever Healthy in Nature’s Lifestyle Change Herd. The first step—finding internal strength—is the most important, she says. “Most people have something in their lives they can point to for strength.”
In addition to running 60 to 100 miles each week, Smith practices tai chi, meditates and enjoys camaraderie with her running mates. She also has an upbeat attitude, believing in the importance of passion, perseverance and “taking negative experiences and making them positive.” According to a report in the Journal of the American Medical Association Network, this spirit of optimism is protective against heart disease and other causes of death.

Eating Well, but Not Too Much

Food is a major contributor to both quality of life and life extension. Global and national recommendations to eat more fiber-rich whole grains, fruits, vegetables, nuts and seeds, and omega-3 fatty acids, while decreasing added sugars and sodium, all help reduce our risk for life-shortening diseases. The plant-based Mediterranean diet consistently rises to the top for its health-fortifying benefits.
However, in contrast to our Western culture’s practice of eating until belt-busting full, Blue Zone Okinawans practice hara hachi bu—eating until one is no longer hungry, but stopping before feeling full.
“We know caloric restriction extends life,” says Lori Taylor, clinical dietitian and Core Faculty of Integrative and Functional Nutrition at Saybrook University, in Pasadena. “But no one wants to do it, because it’s no fun.” Instead, Taylor recommends intermittent fasting, eating only during a set window of 10 or 12 hours each day to reduce caloric intake. 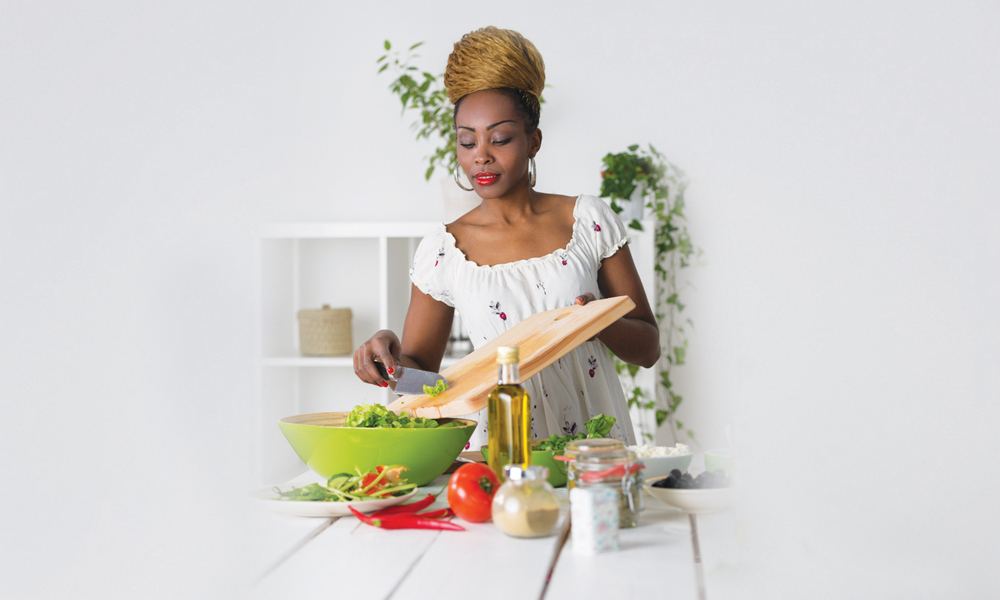 Milles Studio/Shutterstock.com
Similarly, Dorothy Sears, Ph.D., a professor of nutrition at the Arizona State University College of Health Solutions, has researched the impacts of both intermittent fasting and circadian rhythm on how our bodies handle calories.
She recommends a “prolonged nightly fast” of 12 to 13 hours, as well as reducing caloric intake after 6 to 8 p.m. to help maintain a healthy weight and stave off such diseases as Type 2 diabetes and obesity-related cancers. Most significantly, she found that a 13-hour nightly fast reduced breast cancer recurrence by 36 percent among 2,300 breast cancer survivors in the Women’s Healthy Eating and Living study.
Both improving diet quality and restricting calories appear to help slow the rate of aging at the genetic level, in part by preserving the length of our telomeres—the structures at the end of chromosomes that protect our DNA. The Mediterranean diet, with its abundance of protective antioxidant and anti-inflammatory nutrients such as vitamins C and E, polyphenols and omega-3 fatty acids, help prevent age-associated telomere shortening.

Michael Grandner, Ph.D., director of the Sleep and Health Research Program at the University of Arizona College of Medicine, says Americans tend to see sleep as unproductive time, but it’s a “biological requirement for life.”
In fact, it is one of the three pillars of health, along with good nutrition and exercise, says Eve Van Cauter, Ph.D., former director of the Sleep, Metabolism and Health Center at the University of Chicago. “Studies in centenarians have suggested that people who live long and in good health have a regular lifestyle. They spend time in community, eat meals and go to bed at regular times, in sync with circadian rhythms.”
No matter how long we live, we want to make the most of our time on Earth. Beyond diet and exercise, finding our personal passion, reducing stress and spending time in nature and with those we love can add years to our lives.
Despite our virtual social networks, real human connection is vital for physical and mental health. According to a report in the journal Heart, loneliness is as dangerous as smoking for heart disease and stroke risk. So volunteer, join a club, sign up for a community garden plot, yoga or dance class, or host regular potlucks or game nights—these just might be among the best prescriptions for staying young.

Melinda Hemmelgarn, the “Food Sleuth,” is an award-winning registered dietitian, writer and nationally syndicated radio show host based in Columbia, MO. Reach her at [email protected]

11:00am · Virtual Event
View All Add Your Event